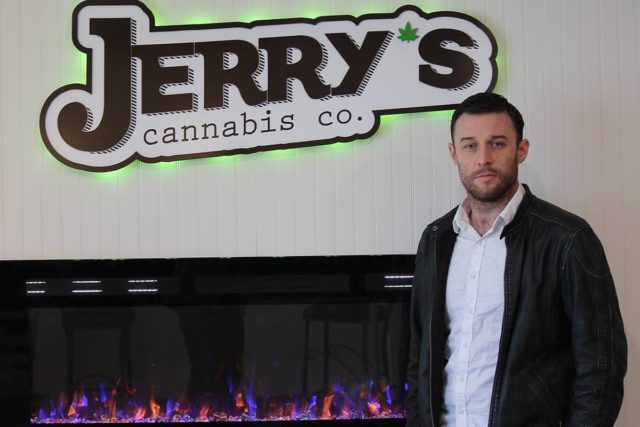 Lake Cowichan will soon have its first retail cannabis store.

Construction is currently underway and Jerry’s Cannabis retail store is expected to open for business by the end of January.

Jerry’s Cannabis has a location in Ladysmith, which opened in May, and the opening of a second store in Lake Cowichan is hoped to be just the next in a series of outlets that will see Jerry’s Cannabis spread throughout the region, and beyond, according to owner Steve Elkiw.

Elkiw said business has been good at the Ladysmith store since it opened, but the fact that he started the business during the ongoing COVID-19 pandemic has provided many challenges, as it has for most of the business community.

“While there has been challenges, we’re really happy with the reception the community gave us here,” he said.

“We’re hoping for better things in the future.”

Elkiw said he chose to open the second location of Jerry’s Cannabis in Lake Cowichan because it will be the first retail cannabis store in that community and he believes there is a market there for his products.

He said servicing smaller communities has also become part of the company’s identity and brand.

“We’re not big business people and we’re not a big corporation,” Elkiw said. “We’re just a few local people with home-grown values and we saw an opportunity to expand into a small town that fits that identity. We expect that smaller centres may be skipped by the larger cannabis companies as the industry grows.”

Elwik said Jerry’s Cannabis has almost completed the long and arduous application processes that are in place to regulate new recreational cannabis businesses.

“For all intents and purposes, we’ve completed the process,” he said.

Changes are occurring with a change in ownership for the new Chemainus Public Market on Willow Street.

She is very excited to become an integral part of the market community and the town of Chemainus, joining her business partner Tony van de Mortel as co-owner of the Chemainus Public Market.

Berry will also run the daily operations of the market as the managing director.

She’s already well-known as the managing director and marketing executive of the Osborne Bay Pub in Crofton and Berry Music Company that is in charge of the live music scene at the pub.

Acquiring her shares in the market only a short time ago, Berry has enthusiastically plunged into her new duties running the market.

She has a very clear vision of continuing the wonderful work put forth in the creation of the market.

Berry has devised a solid plan for the future of the business with a definitive market strategy and is eager to put that plan into action.

“I look forward to finding numerous ways to contribute to the local community, with a focus on fun, food, and flare,” Berry said.

It’s beginning to look a lot like Christmas at the Cowichan Neighbourhood House Association in Chemainus.

Cowichan Neighbourhood House is a volunteer-run resource and youth centre that provides educational and recreational activities for families, youth and individuals as well as resources to those in need.

While the building is only open three days a week during the COVID-19 crisis, volunteers are constantly busy behind the scenes meeting all the necessary requirements to provide for the community before Christmas.

We use cookies on our website to give you the most relevant experience by remembering your preferences and repeat visits. By clicking “Accept All”, you consent to the use of ALL the cookies. However, you may visit "Cookie Settings" to provide a controlled consent.
Cookie SettingsAccept All
Manage consent

This website uses cookies to improve your experience while you navigate through the website. Out of these, the cookies that are categorized as necessary are stored on your browser as they are essential for the working of basic functionalities of the website. We also use third-party cookies that help us analyze and understand how you use this website. These cookies will be stored in your browser only with your consent. You also have the option to opt-out of these cookies. But opting out of some of these cookies may affect your browsing experience.
Necessary Always Enabled
Necessary cookies are absolutely essential for the website to function properly. These cookies ensure basic functionalities and security features of the website, anonymously.
Functional
Functional cookies help to perform certain functionalities like sharing the content of the website on social media platforms, collect feedbacks, and other third-party features.
Performance
Performance cookies are used to understand and analyze the key performance indexes of the website which helps in delivering a better user experience for the visitors.
Analytics
Analytical cookies are used to understand how visitors interact with the website. These cookies help provide information on metrics the number of visitors, bounce rate, traffic source, etc.
Advertisement
Advertisement cookies are used to provide visitors with relevant ads and marketing campaigns. These cookies track visitors across websites and collect information to provide customized ads.
Others
Other uncategorized cookies are those that are being analyzed and have not been classified into a category as yet.
SAVE & ACCEPT